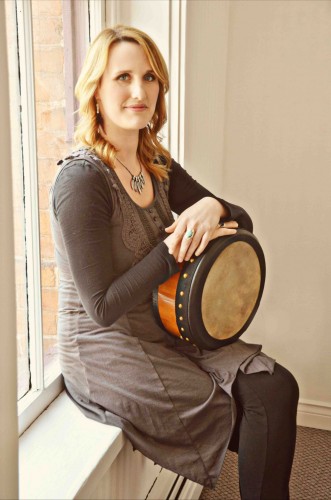 Composer and dancer Emmanuelle LeBlanc is one of the most accomplished female multi-instrumentalists in folk music today. As a percussionist, she is a widely recognised master of podorythmie and was touring internationally as a professional percussive dancer by the age of fifteen. Emmanuelle has a wide range of acoustic instruments in her arsenal, each played with stunning proficiency and innovation. Raised in the musically-rich Evangeline region of Prince Edward Island, Emmanuelle grew up on the traditional instrumentals of her people. She has pioneered her melodic instrument of choice – the tin whistle – in both Acadian music and has become its chief exponent throughout Canada. Her whistle playing is a firey amalgamation of traditional Acadian, Cajun, Irish, classical and rock influences. Also an expert harmony singer of note, her elegant mezzo soprano represents a broad pallet of musical styles.

As an teacher, Emmanuelle’s resume boasts a list of accolades: as an international whistle, piano and percussion instructor, adjudicator and dance choreographer; and a contributing member of national arts organizations across Canada. As a seasoned touring musician, Emmanuelle has performed at thousands of concerts worldwide and recorded on over a dozen records.