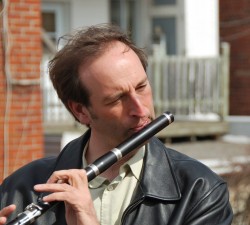 Jean Duval is a pioneer of flute playing for traditional music in Quebec. Composer, multi- instrumentalist and ethnomusicologist, he has been involved in Québécois, Irish and Scottish traditional music circles in North-eastern North America since the early 1980s. He was a member of Phenigma from 1990 to 1995. In 2000, he co-authored with Steve Jones a collection published by Mel Bay of the music of the Irish storyteller and musician Packie Manus Byrne. In 2004, he made a CD of original compositions: Twelve suites in traditional style for one-handed tin whistle. In 2010, he recorded the CD Pièces sur pièces in duet with David Boulanger, fiddler from La Bottine Souriante. Besides his career as an agronomist, he completed in 2008 a Master thesis devoted to composers of traditional music and, in 2013, a Ph.D. research on the crooked tunes of the traditional music of Quebec. He’s now working on various publishing projects in traditional music.