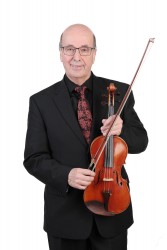 Many Quebec natives born before the quiet revolution keep memories of Saturday evenings moving to the sounds of the violin and the accordion. As privileged witnesses of this era anchored in popular imagery, four generations of Verret of Lac-Saint-Charles perpetuated the musical traditional repertoire to us. In 1952, from the top of his seven years of age, Jean-Marie develops a taste for music. He listens to his grandfather Jean-Baptiste (1894-1955) and his father Jules (1916-1982) giving the evenings a folk atmosphere. He develops a taste for this music, passed on from generation to generation by tradition, without writings or partitions.

Today, Jean-Marie is the guardian of an important repertory of numerous Quebecois pieces from our heritage, most of which have never been recorded or transcribed. During the time of Jean-Baptiste and Jules, the saving of musical pieces happened only through memory, the transmission of the folk repertoire resting on the person’s memory and on the learning by ear. Jules could interpret beyond 500 pieces, stemming mainly from father’s repertoire. Jean-Marie inherited this musical background. He estimates knowing approximately 2000 musical pieces, also drawing in other sources and creating his own compositions.

Considered as the best player of violin and composer, many see in him the most Quebecois of all fiddlers. His repertory is immense and features square dance excerpts from the end of the 19th and beginning of the 20th century. His fearless style, decorated with vibrato, ornamentations and chromatic notes have made him one of the great masters of the Quebecois violin.

He was appointed as one the best fiddlers in the world by the famous Fiddler Magazine, he was attributed the Aldor Trophy during La Grande Rencontre à Montréal stressing the importance of his contribution to the Quebecois traditional music.

Jean-Marie Verret is international renowned since he has exported his family’s repertoire all around Quebec, the United States and Europe. He was also invited to represent the Province of Quebec in the Seychelles. He has performed at the Ashokan Fiddle and Dance Camp in the state of New-York from 1995 to 2000 as well as the Smithsonian in Washington in 1995.

Jean-Marie, who inherited this musical background from his grand-father as well as his father, is a worthy representative of this generations folk musicians’ tradition by transmitting the repertoire to his son Martin. His son personifies the fourth generation of Verret virtuosos. No doubt that our ears will vibrate for an even longer time to the sound of Jean-Marie Verret’s violin, an authentic tradition bearer.