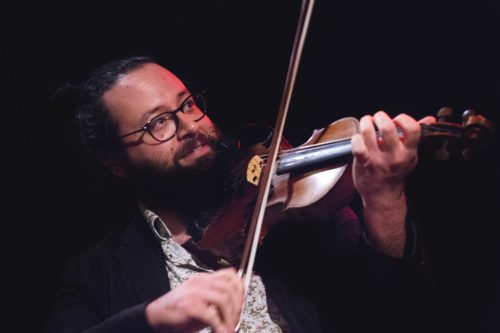 Born in Saint-Hubert, in Montérégie, David starts to play the violin at eight years old. It is during his teenage years that he finds a passion for Québec traditional music. Always increasing, this passion leads David on the big professional stages at the beginning of his 20s with La Part du Quêteux, a band with which he records two album including one that was rewarded as « Best Album – Traditional » at the Canadian Folk Music Awards. Later, he joins the epic Québec trad big band La Bottine Souriante, the two international projects Maja & David and COEFF 4 and recently, he gathers with his long time friends in De Temps Antan. David is also acknowledged for his music composition that can be heard in « Timber! » from Cirque Alfonse and for the original sound track of « Quand ferme l’Usine », a movie from the director Simon Rodrigue. Being a true passionate about Québec traditional music, and wanting to share his knowledge about it, he caries a unique repertoire that one can hear wherever David goes.