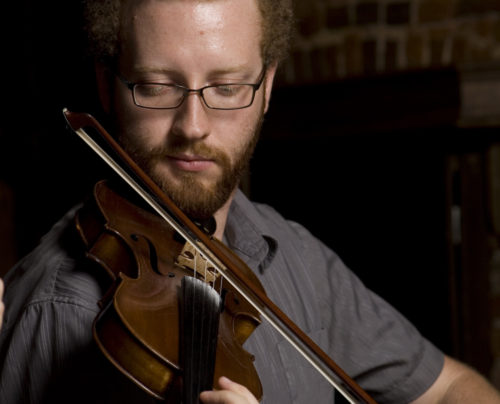 Born in Ste-Catherine-de-la-Jacques-Cartier, Louis-Simon is one of the most remarkable multi-instrumentalists (violin, guitar, harmonica, feet) of the Quebec tradition. He stands out for his talent, but above all for his passion and impressive energy. With his father Daniel Lemieux, he learns directories of tunes from Quebec, Ireland and Scotland since his childhood.

Indeed, from the age of 3, he demonstrates an incredible aptitude for the harmonica and enjoys playing a small violin given to him by Keith Corrigan, an excellent accordionist of Irish descent from Valcartier. At the age of 10, he took part in the Manigance band’s tour through France, where he performed at recalls, alone with his harmonica. At age 11, he learned guitar accompaniment alongside Paul Marchand, a friend of his father with whom they even went to the prestigious stage of the Plaines d’Abraham on June 24, 1994.

Having also made himself known in the community for his sounding talents, he is very much in demand in various events and this course led him to become the technical director of the Rendez-vous EsTrad de Québec. It also has its own recording house, Studio des Trois Lits.