In the summer of 2018, during our 11th edition of the camp, André Gladu, documentary filmmaker, and his team came to film camp activities. It is a first assembly of 21 min, of important moments of the camp, composed of 4 capsules: Extracts chosen with André Brunet and Martin Héroux, A learning by ear with Stéphanie Lépine and her students at expert level, All the world swing with Jean-François Berthiaume and Jam of the teachers with Éric Favreau and the teachers which is entitled: Fiddle spirit. We are very happy to announce that the documentary short film will be officially released in Quebec during the Rendez-vous du Cinéma québécois, Thursday, February 27 in the main screening room of the Cinémathèque québécoise. For more details on the screening of the film, we invite you to visit the festival website: https://rendez-vous.quebeccinema.ca/

To see the four capsules: https://www.youtube.com/user/violontradquebec 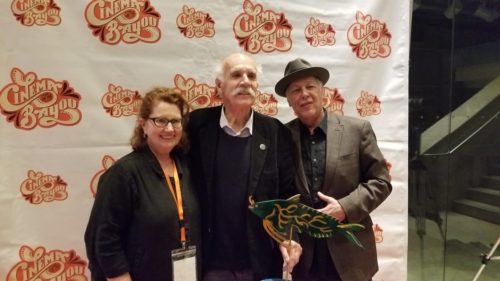 In addition, on January 28, André Gladu presented the English subtitled version (translation of Laura Risk) of Fiddle Spirit in an international premiere at the Cinema On The Bayou Festival in Lafayette, Louisiana. It is with joy that we announce that the film has already won the great honor abroad for the Special Jury Award for Documentary Short (Special Jury Award Documentary Short). We are very proud of this and would like to congratulate André Gladu and his team as well as the teachers of the 11th edition (2018) and all the participants. Congratulations to all. https://cinemaonthebayou.com/