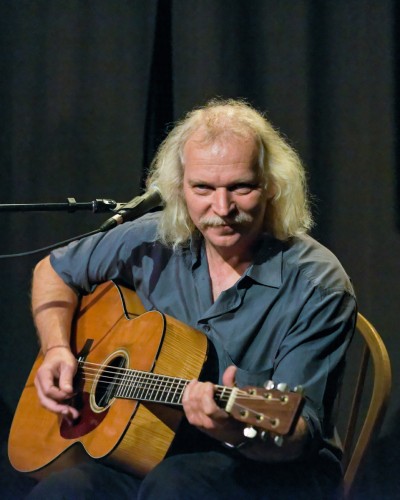 Paul has been a renowned musician in the traditional music world for the past 40 years. Guitarist and singer with great sensitivity and flexibility, he possesses a unique sound and rhythm that make him a prized musician. In 1992, he becomes Angèle Arsenault’s guitar player in her show Bonjour Madame Bolduc and toured in Quebec and all over Canada for the following year and a half. He is the founding member of the bands Manigances and Entourloupe, with which he toured Quebec, Canada, the United States and Europe. He has taught the art of guitar accompaniment, traditional singing and podorythmie at music camps, workshops in Quebec and during his many tours. Furthermore, he has worked on over thirty recordings with many other musicians. For the last fifteen years, he has shared, solo, through his songs and tunes, the spirit of Quebec traditional music to countless crowds.

Paul Marchand rubbed shoulders with exceptional musicians as a teenager. This is how he naturally fell into the world of traditional music as a recognized guitarist.

In 1982, he founded with two good friends (Michel Bordeleau and Jean-Luc Asselin), the group Manigance. In 1985, he participated in his first tour in France with the group Grand Bardas, which will lead to repeat duo and trio tours in France and Brittany. During his stay in Brittany, he joined the formation: Les maudzits Français (Françine Reeves, Patrick and Serge Désaunay) and hosted evenings of traditional Quebec dances throughout France. He will form a guitar duo there with Patrick Désaunay. Upon his return in 1990, Paul resumed his position with the group Manigance for the recording of the second album: Nouvelles Manigances (1991). Album that will be presented in Quebec, Western Canada and Brittany. In 1992, he became a guitarist for Angèle Arsenault in the show “Bonjour Madame Bolduc”. This show will tour for a year and a half in Quebec and in some sixty Canadian cities. Subsequently, Paul founded the group Entourloupe with Daniel Roy and Éric Favreau. Group where different musicians will succeed over the years such as Jean-François Berthiaume, Stéphane Landry and Claude Méthé. With Entourloupe, the tours follow one another: Western Canada, the United States and Europe. Among the many concerts given, the famous American radio show: A Prairie Home Companion, with an audience of 3,000,000 and more on each show, is among the most prestigious. Always active within the formation, the rich sound of his guitar is heard on 3 albums alongside his sidekick and accomplice, Éric Favreau. Meanwhile, he is asked to participate in several other recordings including OJNAB (2001) with Jean-Paul Loyer and many others; Tess (1998) with Tess LeBlanc, Sophie Pomerleau, Hervé Guillemer (Breton accordionist-singer) and Desi Wilkinson (Irish flutist). He will form a duo with the American violinist Laurie Hart and will record 2 albums: Le rêve du cobbler (2005) and Danse ce soir (2000). Stéphanie Gagnon Trio: The Swallow (2011) In short, Paul is today a guitarist and a singer of great versatility and has his own sound and rhythm that makes him an accomplished musician.