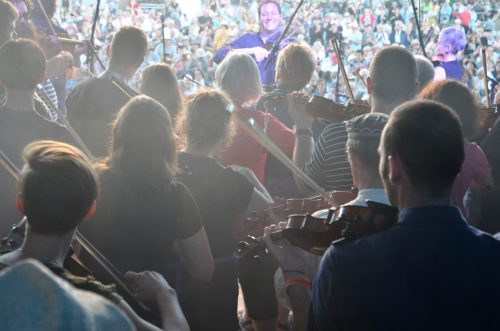 On Friday, July 26 at 6:30 pm, the Gilles-Cantin stage of the Festival Mémoire et Racines at Parc Bosco in Saint-Charles Borromée will be assaulted by the 100 musicians on violin, guitar, mandolin and piano of Camp Violon Trad Québec.

This opening show celebrates Quebec’s musical heritage acquired during the five days of teacher training by young and old musicians from beginners to experts present at the camp. The show will bring together Stéphanie Lépine, Éric Beaudry, André Brunet, founders of Violon Trad Québec, and teachers Louis-Simon Lemieux, David Boulanger, Dâvi Simard, André Gagné, Rachel Aucoin and Michel Bordeleau. Violon Trad Quebec is proud to present a show where our traditional music is in the spotlight, but above all a big musical experience !

This 12th edition is made possible thanks to the financial support of the Government of Quebec and in collaboration with the partners: Plein Air Lanaudia, Lanaudière Mémoire et Racines, Culture Lanaudière, Réseau Québec Folklore, Fédération culturelle de l’Île-du-Prince-Édouard and several donors and volunteers
It’s an appointment to put on the agenda!

Stay tuned for the Festival