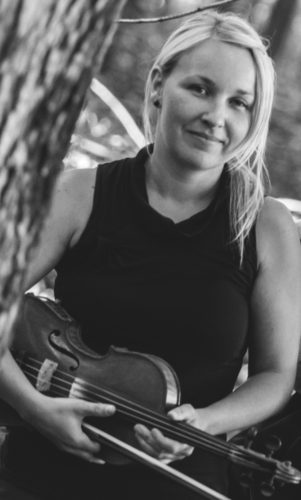 Originally from Lac-Saint-Jean, Québec, Sophie Lavoie was first introduced to the world of music when learning classical piano as a child. Soon, she became interested in the traditional music of Québec and began her ongoing trad apprenticeship by listening to legendary fiddlers from her own region of the province, such as the renowned Louis Pitou Boudreault.

In 2004, she completed studies in classical music with a Bachelors degree in piano in the University of Montréal. With two other musicians, she created the band “L’attisée” and began developing a successful career as a player of traditional Québécois music. From 2005 to 2008, Sophie performed with L’Attisée all over Québec as well as in Ireland, recording the eponymous album which was nominated in 2011 as Album Traditional of The Year at ADISQ.

In 2008, she began playing with piper Fiachra O’Regan as the duo Sophie & Fiachra. The duo recorded four albums : Sophie & Fiachra (2010), Rewind (2014) and Un Canadien errant (2016). In 2016, her album Un Canadien errant was nominated for best album of the year at ADISQ and Canadian Folk Music Award. She was also nominated at CFMA for best traditional singer of the year. In 2018, Sophie & Fiachra launched another album called Portraits with veteran musician André Marchand, “an enchanting CD full of musical twists and turns” (The Irish Music Magazine).

In 2017 Sophie has received a scholarship from FRQSC for studying ethnomusicology at University of Montreal. Following that, Sophie has been invited to teach the fiddle style and repertoire of Quebec at Limerick University, Ireland, at the world recognized Irish Word Academy of Music and Dance. In 2019, she submitted a thesis at Université de Montréal  about fiddle style and repertoire of her native region Saguenay-Lac-Saint-Jean. The thesis is ” Les violoneux du Saguenay-Lac-St-Jean : style et répertoire des derniers de leur lignée”.

” Lovely voice and expert fiddling” Songlines magazine
” One of the rising stars of Québécois music” Roots magazine
” Her tune compositions are lithe and masterful, and her choice of songs is enough to captivate the most casual listener.” The Irish Times