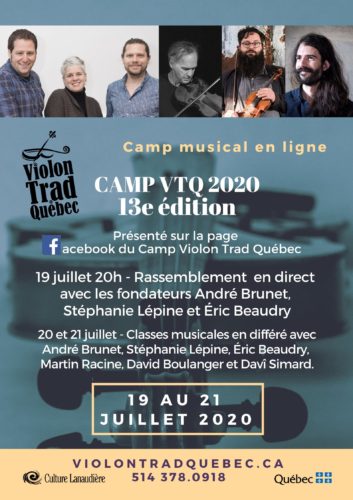 Violon Trad Québec announced last April the postponement of the 13th edition of the Camp Violon Trad Québec. However the VTQ team, eager to maintain the link, the exchange and the sharing of the oral and musical tradition despite the exceptional situation, has put together a reinvented and adapted formula for you to live Camp Violon trad Québec in the comfort of your own home.

Remote, but united! Trad musicians and music lovers can take out their instruments and join the founders of VTQ, André Brunet, Stéphanie Lépine and Éric Beaudry, as well as guest artists and teachers such as Davî Simard, David Boulanger and Martin Racine, who will share their passion and their knowledge virtually as part of the online 13th edition of Camp Violon Trad Québec !

This event is presented free of charge on Facebook @Camp Violon Trad Quebec from July 19 to 21:

Musicians and Trad lovers, we invite you to this original meeting of the 13th edition of the Violon Trad Quebec camp on Facebook @campviolontradquebec. This 13th online edition is produced with the financial support of Culture Lanaudière.