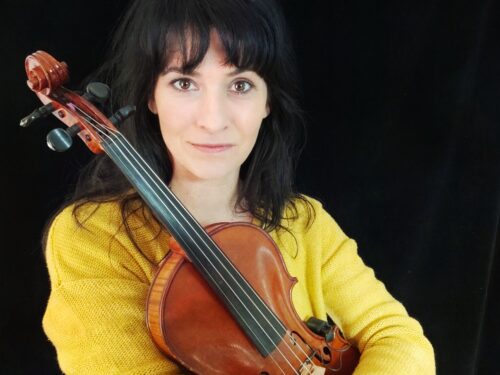 YOUTH CLASS Growing up in St-Pamphile, a small village nestled in the Quebec Appalachians, Marie-Pierre Daigle left the nest, as a teenager, accompanied by a violin.

Mission: Learn the language of music.

She studied in classical music at Cégep de Drummondville, and in jazz at UQAM. After completing her studies, she starts to develop her signing abilities and explores her musical ideas on the stages of Quebec while perfecting her skills. Vocal technique, songwriting, traditional Quebec music and Feldenkrais somatic education.

At the end of 2019, she launched her first self-produced micro-album entitled Perdre son temps. From 2020 to 2022, she is taking advantage of the pandemic break to improve her guitar and piano skills. She also does social intervention shows for various organizations such as, Sans Oublier Le Sourire, Partageons L’Espoir, and for CHSLDs various organisations, HLMs and homes for the elderly. She also dives into the production of a second microalbum and Marie-Mitaine et les Pieds appears in February 2022. Broadcasted by Radio Canada on the Ohdio platform, some titles from the album circulate on the sirius songs and country / folk channel in addition to be available on all streaming platforms. For more than 10 years, the artist has developed a background as a pedagogue in which she integrates in her teaching of the violin, her specialty in somatic education and Quebec folklore.