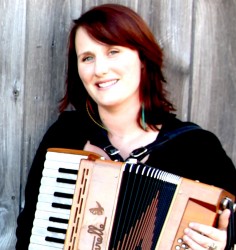 Composer, dancer and accordionist Pastelle LeBlanc is among the most accomplished Acadian musicians of her generation. Raised in the heart of the small Francophone village of Mont Carmel, Pastelle was surrounded with traditional music from an early age. By her mid-teens she was touring professionally as an Acadian dancer throughout North America and by her early twenties, Pastelle had mastered her grandfather’s instrument – the accordion. She brings to it a percussive, melodic right hand, indicative of her formal dance background, and with her left hand, a strong sense of harmony that stems from her formal piano training. And as a singer, her rich, gentle mezzo soprano reveals a host of influences – from traditional Acadian, Cajun, Irish and rock. Similarly, her accordion compositions combine elements of traditional and contemporary world music.

As a teacher, Pastelle has directed and choreographed several dance shows in a variety of styles and has taught piano accordion, stepdancing and Acadian mouth music workshops at festivals worldwide. She has shared stages and recorded with several internationally touring groups and her compositions have been featured on a wide-ranging list of sources from American television (ESPN) to the Japanese film, Finding Anne.