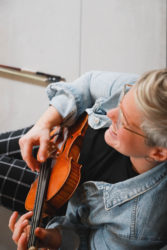 A talented violinist for over 20 years, she was born and still evolves in a family of musicians. She attended college in classical music and honed her training with renowned Irish violinist Kevin Burke and ethnomusicologist and musician Lisa Ornstein.

She is a founding member of the traditional music group La Galvaude which had its heyday in the 90s. Later, she also participated in the formation of the group Norouet. The second album of this quartet titled N2 found itself among the five best records of music in the world in 2009 according to the newspaper Le Devoir.

In 2009, Stéphanie did a project of instrumental composition on soundtrack inspired by a collection of sounds and rhythmic sounds heard in her native region, Lanaudière. In the summer of that year, she was named a finalist at the prestigious Canadian Violin Competition : Canadian Grand Masters Fiddling Competition held in Nepean, near Ottawa. In December, it was with her band Norouet that she appeared on the prestigious stage of the Centre Bell in Montreal during the annual show of the famous Quebec band Les Cowboys Fringants.

Her talent has led her to participate in several big events and to share the stage with various groups including: Ojnab (Jean-Paul Loyer), Oliver Schroer, and Galant, tu perds ton temps.

In May 2015, Stéphanie offers her first solo album La Grande Ligne composed of traditional tunes from her family repertoire and the great fiddlers who popularized the game of Quebecois violin in the 20th century. Also in May 2015, it is alongside talented multi-instrumentalist Jean-François Branchaud (La Bottine Souriante) that Stephanie forged and recorded the album Habillés en propre bringing together songs and instrumental suites extracted from the Quebec repertoire and some overseas sea.

In July 2015, it’s the posthumous release of the DC Ojnaberies et autres banjoritudes of the group Ojnab, on which his brilliant bow game can be heard. Stéphanie has also taken part in several other recordings since the beginning of her career, including, Galant, tu perds ton temps, De temps Antan, Genticorum, Éric and Simon Beaudry, La Galvaude, to name just a few.

Always on the lookout for valuable repertoire and unparalleled work rigor, Stéphanie trained with Pierre Chartrand and Éric Favreau in 2012 to enhance her knowledge of Quebec’s dance music repertoire. Wanting to share the cultural heritage that is traditional Quebec music, it is alongside his groups La Galvaude and Norouet, Éric Beaudry, and violinist André Brunet, that she founded in 2008 the Camp Violon Trad Québec in Lanaudière.

In 2021, she launches a web platform called “Station Trad”. Its objective is to promote the traditional Quebec repertoire by making it accessible online. Different repertoire learning formulas are offered to allow the preservation of our cultural heritage !!

Organizer and teacher since 2008 at Camp Violon Trad Québec, professor of violin staged for eight years at CRAPO, private lessons for over 20 years … These are just a few strings from the immense talent of Stéphanie who continue to charm her entourage. Her style, deeply dependent on the traditional heritage of Quebec, allows to easily perceive Irish influences fruit of a concern for accuracy in her technique and in the interpretation of the pieces of the traditional repertoire. Her bowing technique leaves no one indifferent, she brings out her charm and passion for the fiddle and leads us into an endless dance.