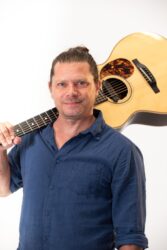 A native of St-Côme in the Lanaudière region of Quebec, Éric was introduced to traditional music from an early age. He was influenced by the family repertoire, starting to sing and play guitar at the age of ten, accumulating the songs of his father and grandfather. His passion for music in general led him from college to university, where he graduated in the spring of 2000 with a degree in interpretation (pop guitar / jazz).

He was first known in 1992 as a founding member of “La Galvaude”, a group of traditional Quebec music composed of several native musicians from the Lanaudière region, including violinist Stéphanie Lépine. Although Eric started composing songs and tunes early that reflect his modern influences, his ties to his family heritage have profoundly influenced his musical orientation.

He has forged a reputation over the years in the field of traditional Quebec music and forms groups De Temps Antan, Norouet and Ni Sarpe, Ni Branche. For 10 years, he can be heard in the famous Lanaudoise formation: La Bottine Souriante. His music takes him to many scenes in Quebec and Canada, through the United States, Europe and even Asia. Being one of the great musicians of his generation, he has participated in several other projects including: Ojnab (Jean-Paul Loyer), Oliver Schroer, Tess Leblanc, humorous duo Crampe en masse. As a director, he signed bands such as: Le Bal à l’huile and Excès de Trad and co-produced the albums Eric and Simon Beaudry alongside his brother and Brunet-Beaudry with violinist André Brunet.

Along with this music career, Éric collected more than 100 songs from 16 seniors in his hometown, Saint-Côme, who generously lent their voices and songs during various recording sessions conducted between September 2001 and January 2002. He produced an audio document of this first bank of songs and made it accessible to the population at the municipal library of the village.

For over twenty years, Éric has made himself known on stage by delivering tunes and traditional Quebec songs. He is more and more recognized and asked to participate in various activities in the field of traditional music. He has become an important pillar in this community as a professional musician and singer who proudly interprets the repertoire of our ancestors around the world and also as an organizer, collector and producer.

As co-founder of the Camp Violon Trad Québec, it is clear that his activities parallel to his accomplished career as an artist are intimately connected and form a whole that aims to propagate and to keep some of our history here.